Gunung Mulu National Park near Miri, Sarawak, Malaysian Borneo, is a UNESCO World Heritage Site that encompasses caves and karst formations in a mountainous equatorial rainforest setting. The park is famous for its caves and the expeditions that have been mounted to explore them and their surrounding rainforest, most notably the Royal Geographical Society Expedition of 1977–1978, which saw over 100 scientists in the field for 15 months. This initiated a series of over 20 expeditions now drawn together as the Mulu Caves Project

The national park is named after Mount Mulu, the second highest mountain in Sarawak.

Gunung Mulu National Park has the largest known natural chamber or room – Sarawak Chamber, found in Gua Nasib Bagus. It is 2,300 feet (700 m) long, 1,300 feet (396 m) wide and at least 230 feet (70 m) high. It has been said that the chamber is so big that it could accommodate about 40 Boeing 747s, without overlapping their wings. The nearby Deer Cave is one of the largest single cave passages in the world.

Mulu’s limestones belong to the Melinau Formation and their age is between 17 and 40 million years (Late Eocene to Early Miocene).
Stratigraphically below the limestones, and forming the highest peaks in the south east sector of the Park including Gunung Mulu, lies the Mulu Formation (shales and sandstones). The age of these rocks is between 40 and 90 million years (Late Cretaceous to Late Eocene).

Fauna:
Eight species of hornbill have been spotted in Mulu including the Rhinoceros Hornbill Buceros rhinoceros which features on Sarawak state emblem, the White-crowned Hornbill Berenicornis/Aceros comatus and the Helmeted Hornbill Buceros vigil with its large solid casque (bill).

Twenty seven species of bat have been recorded in Mulu. Deer Cave in the southern limestone hills of the park is home to an enormous colony of Wrinkle-lipped bats (Tadarida plicata). The bats exit the cave almost every evening in search of food in a spectacular exodus. A huge mound of guano in the cave is evidence of the size of the bat colony that roosts in the cave’s high ceilings. 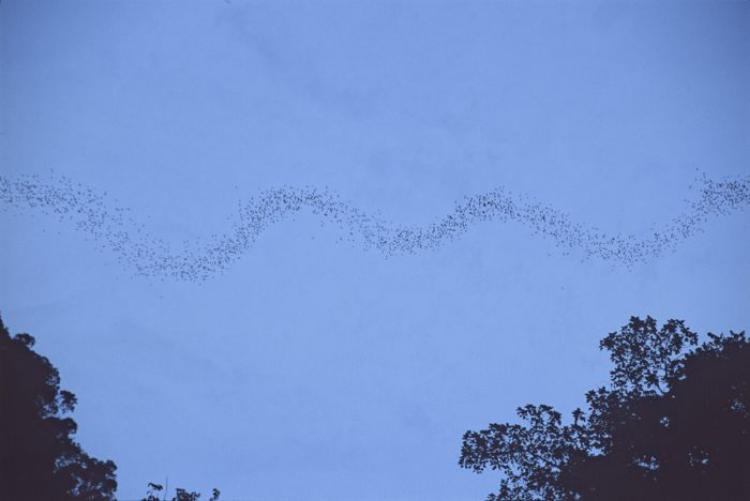 How to reach:
Mulu National Park is a very remote access area; the only practical way of getting to and from it is by air, through Mulu Airport. There are flights between Mulu Airport and Miri, Kuching and Kota Kinabalu with MasWings. Alternatively, it is possible to travel by river from Miri, which is about 100 km away, using a riverboat, then a chartered long boat, which in total takes around 12 hours. Before the opening of the airport and the opening of a helipad in 1991, this was the only way to reach the national park.

Excursions to Mulu continues to retain the sense of adventure associated with its original exploration through the provision of adventure caving and other adventure activities. The primary focus, however, has shifted to the promotion of an awareness of the significance of the park and its environment through the provision of ecotourism activities that foster understanding and appreciation of the parks values.

Are you looking for